Michael Miller, an Indianapolis, IN-based technical writer, shares what it’s like to be new to the field, his passion for it, the struggles he faces, his goals, and more.

Mentioned during this episode:

END_OF_DOCUMENT_TOKEN_TO_BE_REPLACED

Alan J. Porter, Head of Strategic Services Practice at [A], talks to Ed Marsh about why tech writers are now content engineers, why metadata is important, what it’s like to document massive hardware, and more.

Alan is also an accomplished author and critic of comics, pop culture, sci-fi, and more.

Mentioned during this episode: END_OF_DOCUMENT_TOKEN_TO_BE_REPLACED

“Win tickets to the Honda Grand Prix of St. Pete”, the tweet said. Take a screen shot of the TrueCar Web site and “be creative”. IndyCar driver and British hottie Katherine Legge will choose a winner.

Right up my alley, I thought. I love IndyCar, I love being creative, I love Photoshop, and I’d sure like to meet IndyCar driver and British hottie Katherine Legge (note: both Katherine and I are engaged, presumably to other people). The last time I saw her race in person was 2007 at Road America, the year after she had a horrifying crash at the same track. After that, she raced in German touring cars for three years, then spent most of last year trying to get an IndyCar ride.

Thankfully, TrueCar’s site design is incredibly simple – Big main picture, tagline, and testimonials – leaving lots of room to… be creative. My first thought before I even saw the site was to base my concept around IndyCar, and the idea gained traction with the testimonial on the bottom from “Michael C. “.

So I opened up Photoshop, pasted in the screen shot (a technical term. No, really.), and off I went.

END_OF_DOCUMENT_TOKEN_TO_BE_REPLACED

Congratulations on your recent appointment as CEO of the IRL. I’m sure you know that you have a momentous task ahead of you; between “The Economy”, the hurt feelings from both sides of “The Split”, and sagging ratings on a little-known network.

I started watching IndyCar, back when it was originally IndyCar, in the mid-80s. Like most teens, I was car crazy, fueled by the fact that my Dad was a mechanic and service manager for Toyota. In fact, he won a Toyota-run contest and attended the 1984 Indy 500.

My entry into the IndyCar world was the Marlboro Grand Prix of the Meadowlands. As a high school student, it took me three years to afford going to race day. I went to one practice day each year before that, and I can still remember the sickening sound of John Andretti’s car crashing into a wall at one Friday practice. I met A.J. Foyt the year he retired, and Willy T. Ribbs asked me how the weather was outside his trailer on a wet day. From then on, I was hooked.

As I matured, and the Meadowlands Grand Prix shut down, I made my way to Nazareth. I called out of work “sick”, and stayed in a horrible hotel the year of the infamous snowstorm, when Mark Blundell and “Big Mo” Gugelmin had a snowball fight. Barry Green saying “nice shirt” as I walked about the paddock with my Team Green polo on was particular thrilling for me. Waiting for Jimmy Vasser to get off the phone to sign his 1/18 scale “Superman” car after Nazareth is something I’ll never forget.

On my vacations from work, I went to a different race each year. I visited Cleveland, Portland, Long Beach, Montreal, Road America. I flew from Newark, NJ to the Houston race, two weeks after September 11, 2001. I took my now-fiancee on a weekend to Road America in only our second year of dating (She’s a keeper, I know).

I brought some friends along to a couple of races. Most of them weren’t too interested in the race, especially on ovals, but what they all loved was the access to the drivers and teams.

In 2002, my father and I drove to Montreal for the inaugural Champ Car race there. Dad truly enjoyed himself, especially being wished Happy Birthday by then-CEO Chris Pook. I still have a Paddock sign from that race hanging proudly in my office. I almost missed getting Mario Andretti’s autograph, but as he was about to pull away on his scooter, I quietly said to him “thanks for everything you do for Champ Car”. He paused, looked at me, and signed my program.

About the same time I started to get really into IndyCar, a young, bespectacled Paul Tracy stepped into the scene. His speed, charisma, and outspoken personality were a huge draw for me, especially since he was approximately my age. He is still one of my biggest heroes to this day. He always tells it like it is, which is why people like Tony Stewart in NASCAR.

Probably most importantly to you, I spent my disposable income on Champ Car memorabilia. I bought t-shirts, polo shirts, 1/18 scale replica cars, hats, software, you name it. I bought a Toyota Celica because at that point, Toyota was still in the series.

When The Split happened, I chose sides, and since I greatly preferred road course racing to ovals, I stuck with CART. As the years continued, I watched only one IRL race – the Indy 500, and only after Ganassi and Montoya went back.

Unlike most die-hard Champ Car fans, I watched IndyCar after reunification. While it was great to see some of those old CART drivers like Helio, Tony Kanaan, and Scott Dixon, somehow, for me, it didn’t have the same “feel”. I think it was primarily that the cars are just ugly. Compare the current Dallara with the Lola and the DP-01 — both gorgeous, almost timeless race cars. Regardless, I took time off work to see the drivers in front of Macy’s in New York last year, and I watched just about every race. 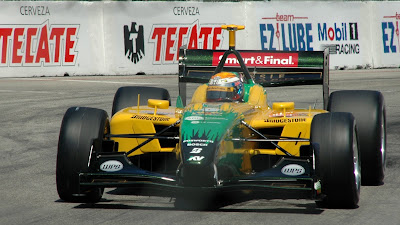 Here’s what I’d love to see back in IndyCar:

I wish you nothing but success.